Welcome to the Homo Ludens homepage! 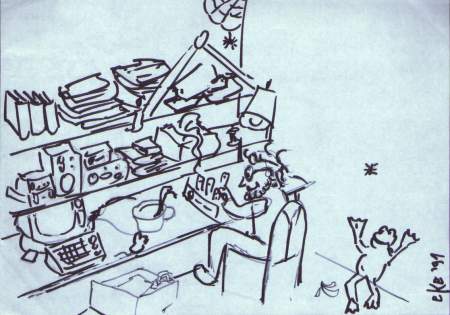 A long, long time ago a bright ape figured out that by climbing down from the trees he could more easily master his life, and that of others. So, the new species homo was born! Some time later, homo found out that to master others, and to force them if they didn't obey quickly, it was an advantage to stand up. More respect, greater apparent size, and so. And stones reach farther when thrown from aloft. So, we had homo erectus.

Over the eons homo erectus developed more and more ability to master other's lives, soon being called homo sapiens. But when his inventive reached so far that he had developed weapons able to kill whoever didn't want to be told what to do, it was no longer thrilling enough to boss others around. Homo sapiens wanted something else, and better. He started to play. Homo ludens was born!

This page is about the toys and games (you may call them hobbies) played by one specimen of homo ludens: Me.

If you don't understand what "homo ludens" means, then please read Homo ludens for dummies!

Here are several subspecies of homo ludens. Over time, more species, and more contents about each, will be added.

Homo ludens photographicus (one of my oldest hobbies)

Homo ludens philosophicus  (my thoughts about some odds and ends)

Homo ludens forestalis (setting up residence in a little paradise)

You can also use the site map to jump directly to any of the individual pages.

This web site is oriented toward contents, rather than special effects, bells and whistles. This should help in quicker loading and easier reading.

If you have questions or comments, please first read the FAQs . If after reading them you still want to contact me, you will find my e-mail address in that same page.